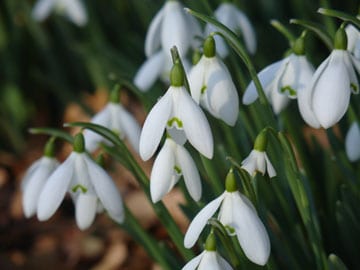 A perennial bulb, probably native, found in damp shade under trees and often in churchyards. The drooping, pure white flowers appear from January to March.

A local name in Norfolk is Fair Maids. Another old name, from medieval times, is Candlemas Bells. Candlemas (the Feast of the Purification) is 2nd February and snowdrops were used to represent purity and chastity and as an emblem of hope and consolation. In older times the Druids were said to plant them in their sacred groves, which possibly accounts for some other beliefs, such as the first snowdrop to flower being a symbol of death.

Although planted in gardens primarily for its beauty, it may have been grown as a medicinal plant known in early writings as ‘moly’. This may account for its common occurrence near former monasteries and abbeys. In fact it may have been widely introduced to such sites across northern Europe. In recent times an extracted chemical called galantamine has been found useful in treating the early stages of Alzheimers disease.